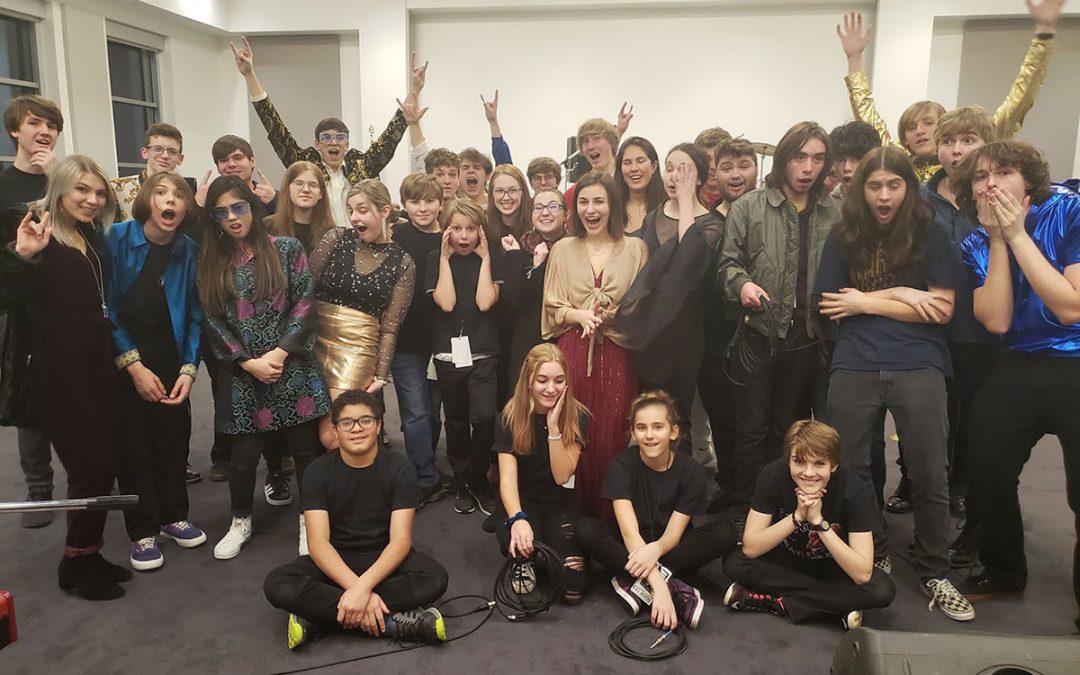 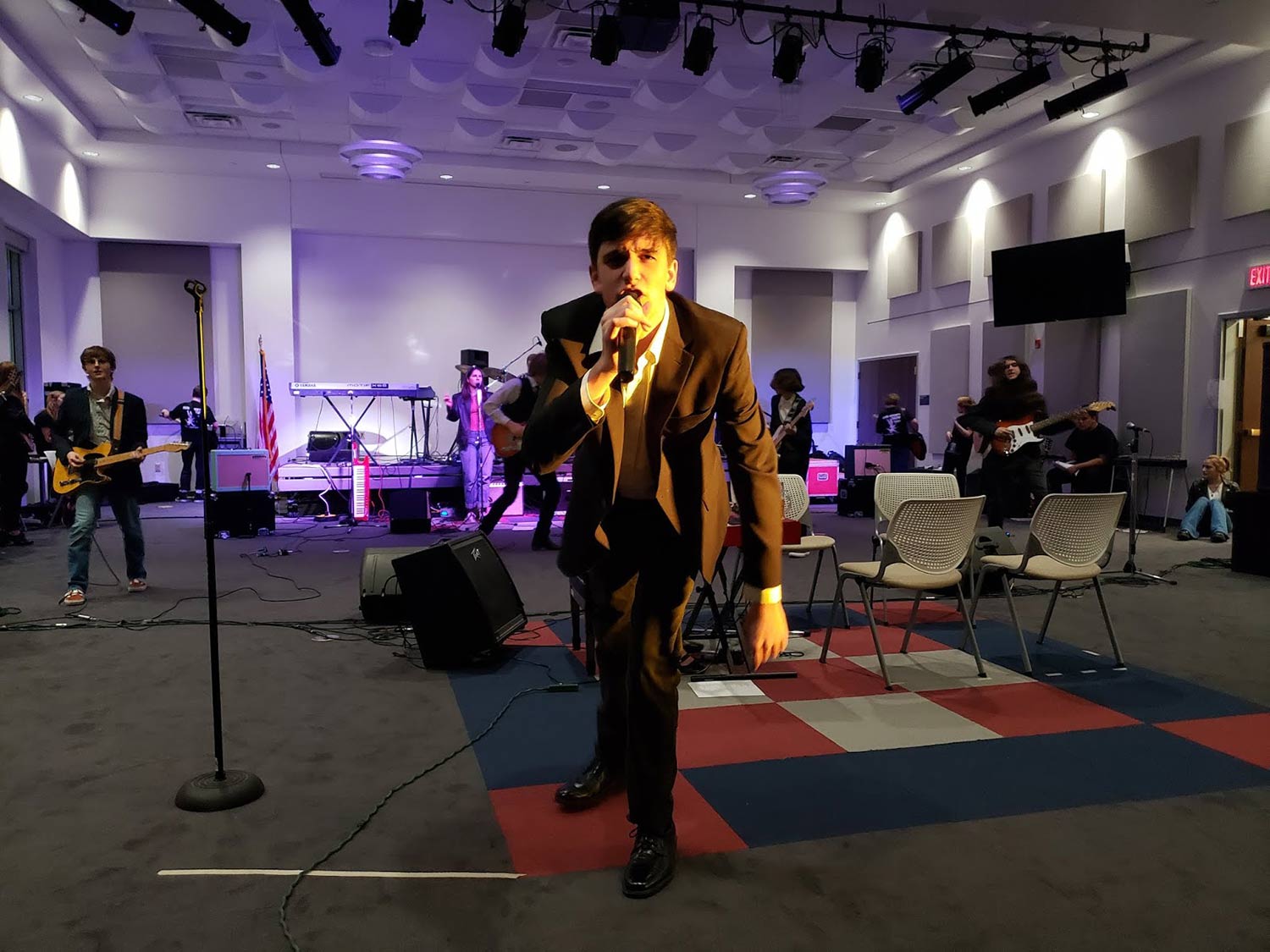 Yesterday we sold out the Community Arts Center… We had seen the ticket sales rising, and when it passed 1500 we celebrated. When it hit 1700 we were stunned. As it closed in on capacity we were all in disbelief, expecting the sales to stall, never expecting to hit that mark. Never expecting…

In 2003, I asked if it would be possible for our small school of music to put on a concert, Dark Side of the Moon, on the Community Arts Center Stage. Suspecting that it was way to big for what we had in mind. So I was not surprised when he said the rental wouldn’t be worth our while. Leading to our first show taking place in a function room at the Quality Inn, which was in South Williamsport at the time. 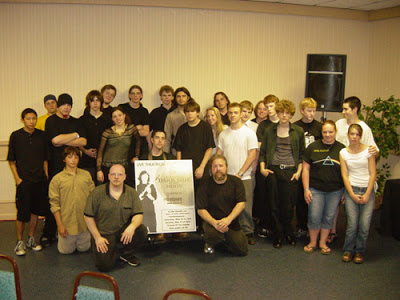 We would go on to hold our Woodstock performance at the Quality Inn, Tommy in the Loyalsock Middle School Auditorium (thanks to Morgan Myles- Pinnsoneault), and finally our Prog Rock Karnevil at the Howard Theater in the Masonic Temple.

It was at this last performance that I formally met Rob Steele, who was the new ED for the Community Arts Center at the time. Rob said he really liked what we were doing and wanted to get involved, suggesting that we bring our next production there. And the rest is history, as they say.

For our first concert at the CAC, The Wall, we built a 30 foot long, 9 foot high wall each night out of white cardboard boxes, and then knocked it over at the end of both shows. Once the CAC crew realized how totally crazy we were, they were all in, and a great relationship was born that has lasted for 14 years, and 40 different performances.

Those early shows at the Quality Inn, etc. were well attended considering our mind set then. Two hundred people attending a show was a lot from my perspective as a local musician. The simple fact that we were selling tickets to people in the community that did not have any direct relationship with any of us, who just attended because they enjoyed our student performances meant a lot.

Moving to the Community Arts Center gave us a greater amount of exposure, and prestige. At first we felt like the stray dog invited into a rich families home. However, over the first series of shows the crew and staff made  us feel truly welcome, and encouraged us to see the CAC as our home. An honor we have never taken for granted.

In the last 10 years the audiences have grown steadily. Killer Queen brought in 1000 on the second night of its run, forcing us to open the balcony for the first time. Subsequent shows hit new high marks for audiences over two days. Our Outlaw Country performance hit a new high of 1200 in one night, which was quickly surpassed by HisStory, a tribute to Michael Jackson which sold in the area 1400 tickets. 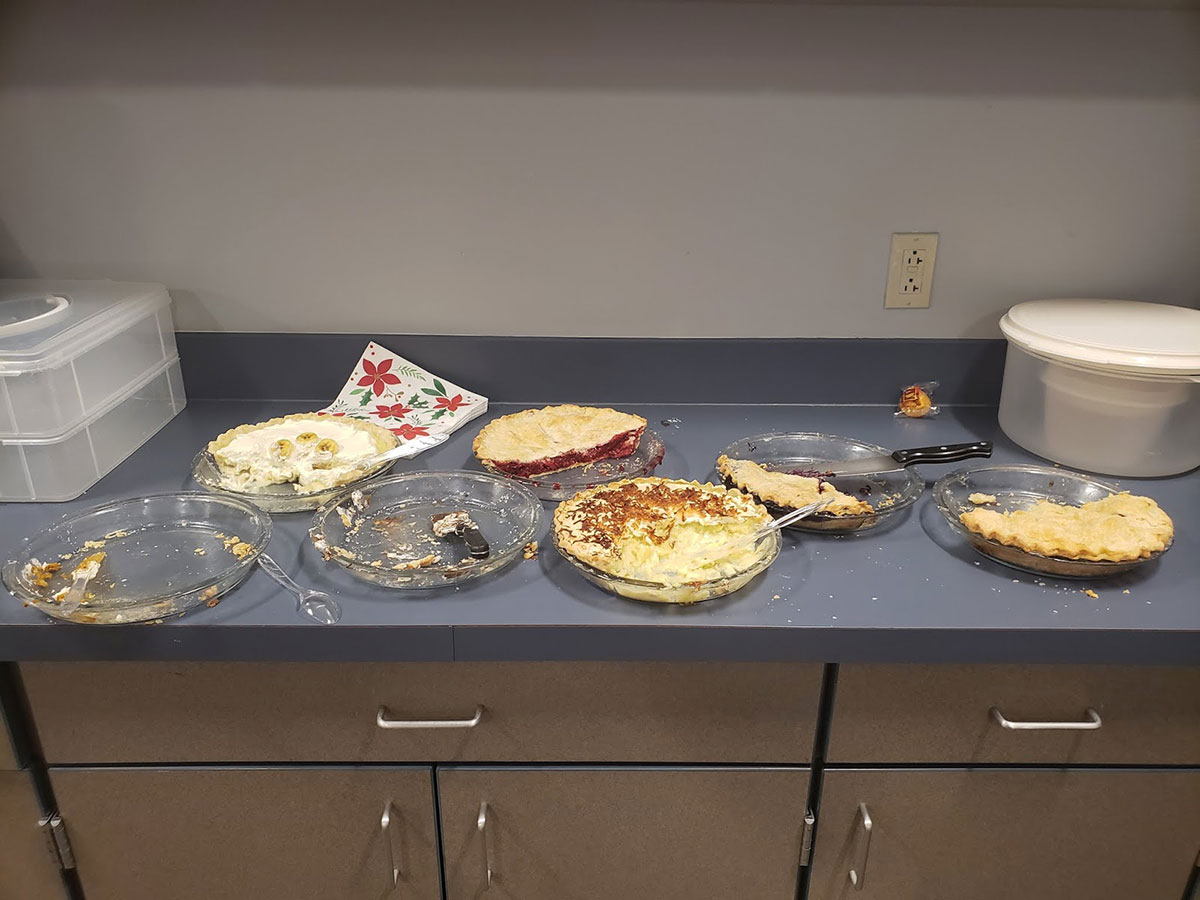 All that’s left of the delicious pies that we ate during our dress rehearsal. Thanks, Lisa Briggs!!!

The audience has become an important part of our musical family. Their loyalty to our program, our students, and the performances, is unique, and humbling. As I do my pre-show walk I see hundreds of  familiar faces that I only know through our performances. I hear stories from audience members, many who come from quite a distance to attend our student powered performances. Most say they came to a performance not knowing what to expect, and were hooked. Many know the performers names, and have their favorites that they look forward to seeing. It creates a truly amazing atmosphere for our students to perform in. 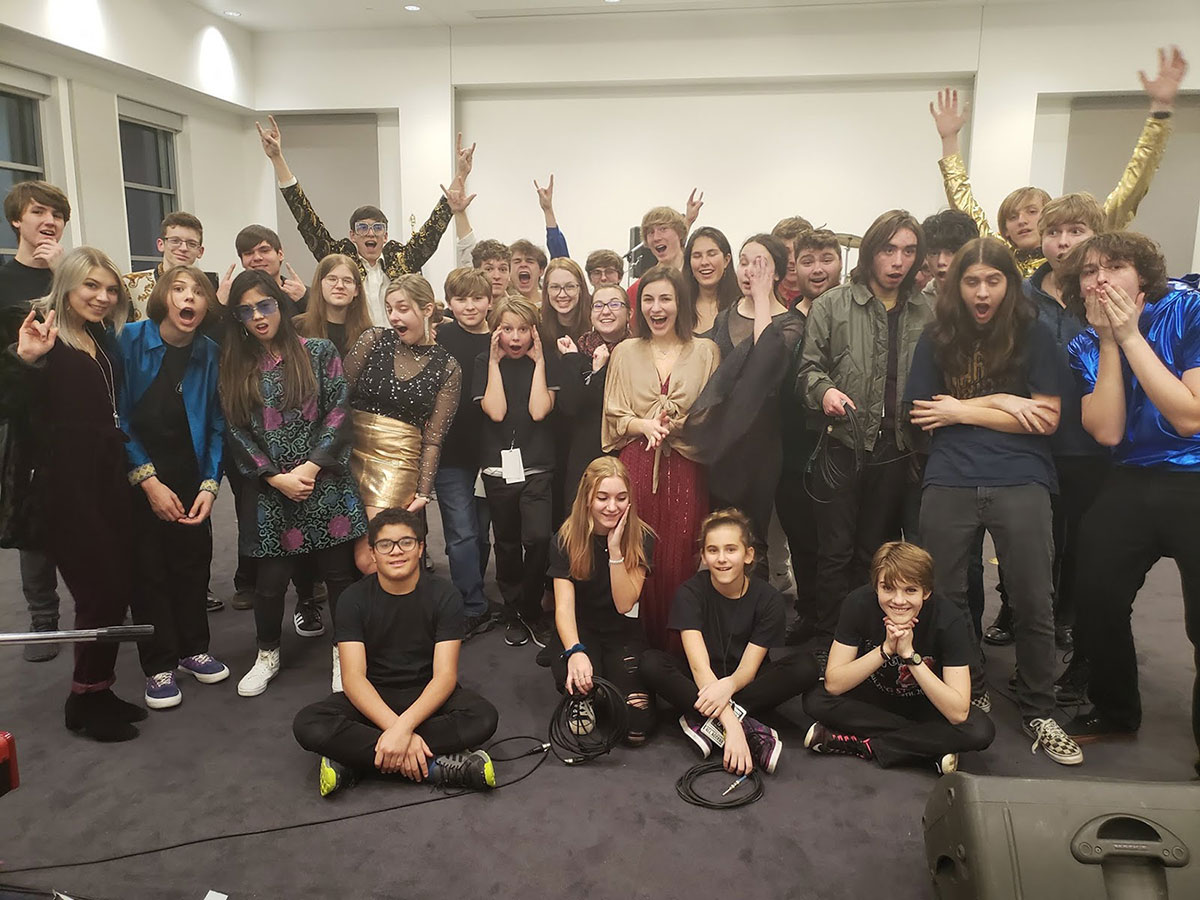 I am humbled. I know that this high water mark of high water marks is due in no small part to our school and the programs we’ve created. Truly though it is primarily a testament to all of the hard work and dedication that our student performers have put into this program over the last 16 years, and the dedication of our audience. 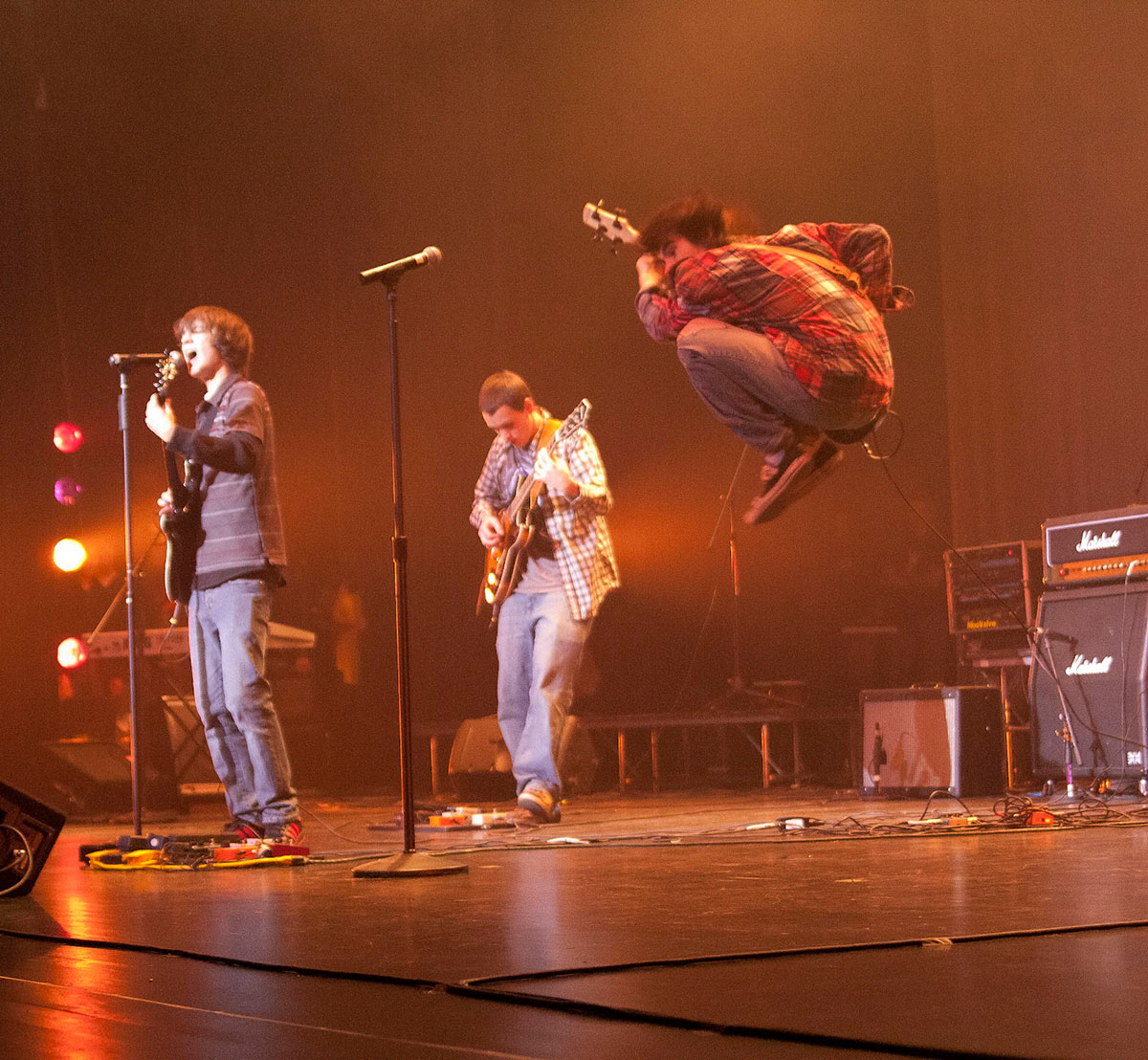 All that’s left of the delicious pies that we ate during our dress rehearsal. Thanks, Lisa Briggs!!!

From the very start hour students sacrificed their free time, disciplined themselves, committed 100% to the program, endured my constant nitpicking, took the responsibility to lead themselves and each other, and worked hard at hitting the high bar that I, and the students who came before them set. Those student that left everything they had lying in a heap of sweat and passion on the stage at the end of each performance.

It’s these young performers that the audience has come to see, from the first show all the way up to today. It is their youthful enthusiasm, emotional intensity, musical skills beyond their age, and most importantly their love of music, and each other that the people come to see.

Tonight it’s all going to come out on that stage, and it’s going to be unbelievable.