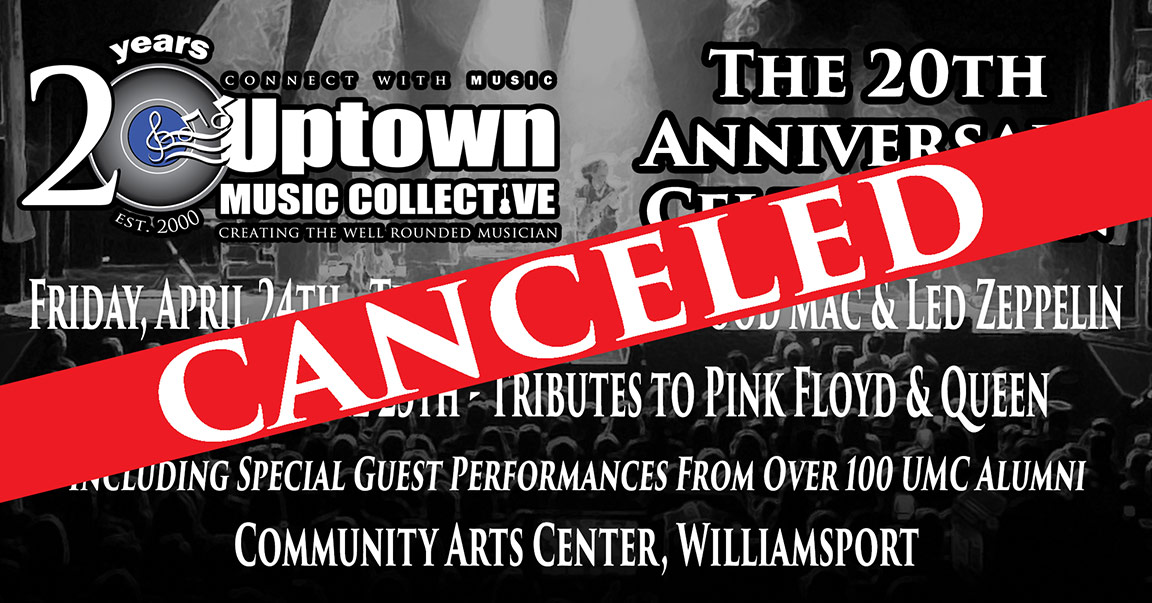 THE 20TH ANNIVERSARY CELEBRATION IS CANCELED

Friends & Fans, unfortunately, due to the COVID-19 pandemic, the Uptown Music Collective has been forced to cancel our 20th Anniversary performance slated for April 24th & 25th at the Community Arts Center in Williamsport.

Those that purchased tickets to this show will be receiving an email later today from the Community Arts Center with refund instructions.

Because this April is the official start of our 20th year, we will be pushing the 20th Anniversary Celebration concert to April of 2021 at the Community Arts Center to celebrate this organizational milestone at the completion of our 20th year! We plan to tribute the same artists in the same large-scale format featuring over 100 UMC Alumni on the CAC stage alongside current students!

These are unprecedented times. We don’t know what our world looks like a week from now – we don’t know for how long we’ll be apart. But we will continue to do everything we can to connect our community and our students with music.

Thank you for your continued understanding and support!

4 MINI SHOWS AT THE 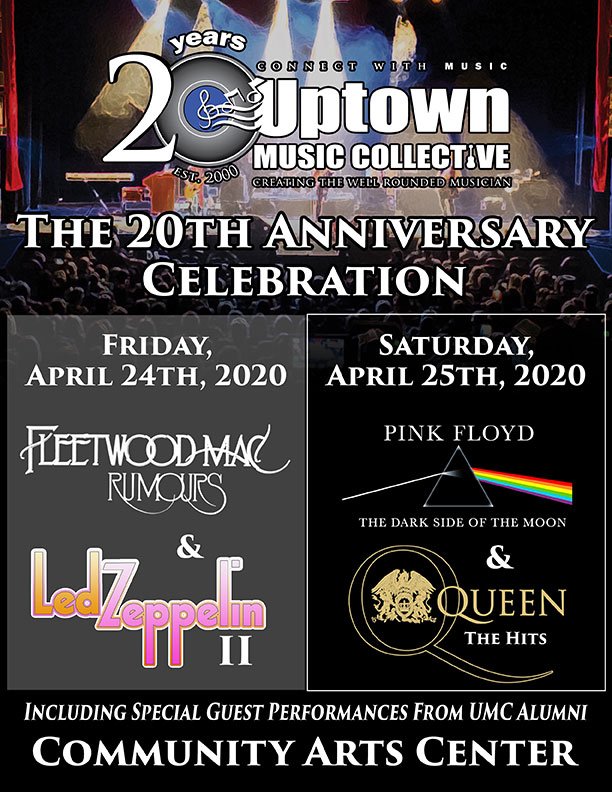 In April of 2020, the Uptown Music Collective hits its 20th Anniversary, and in honor of this milestone, the nonprofit school of music will present for the community that has supported it an ambitious and exciting weekend of great music. Featuring 50 returning alumni performing alongside current students and staff bringing to the stage, not just one great concert event, but four over two nights. Each 75-minute performance will be centered around an iconic album and artist, and include a few more of the artist’s classic songs.

In 1977 the British-American rock group Fleetwood Mac released their most successful and important album, Rumors. As the first performance of the 20th Anniversary Celebration, the Uptown Music Collective will perform the iconic album in its entirety. Featuring classic hits like Go Your Own Way, Dreams, Don’t Stop, You Make Loving Fun, and much more.

A live performance of one of the bands best albums played in its entirety featuring classics like Whole Lotta Love, Heartbreaker, Ramble On and more, followed by a carefully chosen list of Zep classics to close out this powerful set. Led Zeppelin has been an important touchstone for the Uptown Music Collective over the years, always bringing out the best in the student performers.

Set 1 – Pink Floyd Dark Side of the Moon

For the grand finale of the UMC’s 20th Anniversary Celebration, a tribute will be paid to her royal majesty of rock and roll, Queen. Bringing to life all of their greatest hits, featuring a rock choir, high-quality production and all of the passion and power you would expect from a tribute to these iconic rock legends. The performance will include Bohemian Rhapsody, Killer Queen, Another One Bites the Dust, Tie Your Mother Down, and so much more.

Note: When using the ticketing option below, you will be sent to the Community Arts Center site after you click “check out”